I've come across several fun/interesting videos on YouTube the past few weeks, never got around to posting them because I've been busy with stuff at college. The end of the semester is sadly always like this. Just tests, tests and more tests that keep you from doing anything else.

Anyway in a way it's a good thing, because now I get to make a whole post with just the videos! They would have otherwise ended up as footnotes, footnotes you'd probably not even notice. So here are Varun's Top 10 Recently Watched Videos, ranked in reverse chronological order. "Top 10" lists are always more fun than plain bulleted ones, aren't they?

10. If You Come Today — South Indian English Video
I'm sure most of you would have already seen this by now. If you haven't, you should.

9. Tale of Rock
A very well made 3D animated short film by Stevo Payne and John Godwin. It's funny too.

8. System of a Down - Chop Suey
A 2 year old kid rocking out to this SOAD song!

6. Orestes — Piano Cover
I always thought Maynard's voice was unimitable. But this guy is just amazing.

5. Mel Blanc on David Letterman
Mel Blanc is the voice of classic cartoon cartoon characters like Bugs Bunny, Daffy Duck, Porky Pig and hundreds of others. Wonder how he remembers what his actual voice sounds like.

4. Content-Aware Image Resizing
A new technique of image resizing that keeps the important features of the image undistorted.

3. 300 — Speed Painting and Animation
I don't think I will ever have the patience to do something like this.

2. Linkin Park Parody
One of my friends had added this video to his favourite videos list on Orkut. I can see why.

1. Portal
And I thought people ran out of ideas for video games.
Posted by Unknown at 1:41 AM 3 comments:

Karthik finished a drawing of Milla Jovovich ('Alice' from Resident Evil) today. As with many of his recent drawings, he was going to edit/colour it in Photoshop. I had never digitally coloured an image before, so I thought it'd be fun to give it a try. I grabbed myself a copy of the original scan and both of us started working on our own digitally edited versions of the drawing! 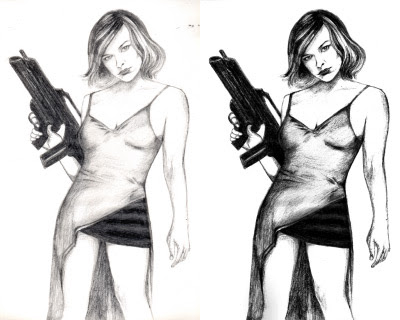 On the left is the original scan, and on the right is what it looked like after I edited it in Paint Shop Pro. Boosted the contrast of the image while retaining all the details. Then I started colouring it using the air brush. The colouring is pretty basic, no fancy layers for the shadows/highlights and all. Once I finished colouring it, I added the splats and the text. This is the end result — 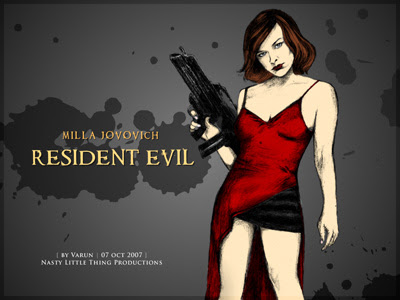 And you're probably wondering what Karthik's version looks like, so here it is — 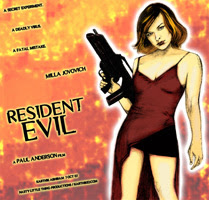 EDIT [ 14 Oct ] : Removed the stain from Milla's arm. And changed the flat background into a gradient. I think it looks better this way.
Posted by Unknown at 7:38 PM 12 comments: