Karthik and myself were at Chennai last weekend, and our return flight landed at the newly opened Rajiv Gandhi International Airport at Shamshabad, Hyderabad.

I filmed a couple of clips on arrival at the airport, and yesterday I edited them together into this short video —

The background music is a track from NIN's latest album, Ghosts; I don't know if it really suits the video, but I couldn't find anything better to use. All clips were filmed with my digicam (hence the crappy video quality), between 2:30am - 3:00am. I also took some photos at the airport and made some wallpapers out images I took from the plane, but all that reserved for another post.
Posted by Unknown at 11:35 AM 6 comments:

It's been one and a half months since the last update! I haven't had the time to make any new wallpapers or videos to post here, and I didn't really feel like making a random post about nothing. Anyway so what's been keeping me busy all this while? Read on —

The Final Year Project
First, the final year project that I'm doing for Wipro, titled "Trend Analysis of the Xen Hypervisor for the Optimized Management of a Business Service in a SLO Framework". Sounds like Greek and Latin, doesn't it? Sounded that way to me too, until Shashank and myself spent a couple of weeks reading about all this unheard-of stuff and making sense of what we're actually supposed to do. We've been working on this project for over two months now, and so far it's been an amazing experience (damn challenging too!). I don't think I would have ever forced myself to learn so many new things in such a short time otherwise.

This was never a tech blog, but if you guys are interested, I could put up a series of technical articles about Xen and the other things I'm working on sometime later. Post a comment or drop me an email and let me know.

Watchmen
I hardly read books. The last book I read was Freakonomics by Steven D. Levitt and Stephen J. Dubner many years ago. The first few chapters were really interesting, after that it seemed like the authors ran out of points to make. I don't know, maybe they just wanted to increase the page count so they could charge a few extra bucks.

Anyway, unlike Freakonomics, the book I'm reading now just keeps getting more and more interesting with every chapter I finish. The book is called "Watchmen" — it's a 12-chapter graphic novel written by Alan Moore and illustrated by Dave Gibbons. Karthik considers this one of the finest graphic novels of all time, and I can see why. I'm extremely curious to see how they adapt such a complex story into a movie next year, although the first look at the characters and screens from the movie seem quite promising.

Ciencia '08
Hard to believe a whole year has passed! It's like as if it was just a few days ago that I made that post about Ciencia '07.

This year it was conducted on 15 and 16 March. I wasn't much into organising the event this time — hard to do when you only attend college twice a week. Anyway, Aasritha and myself hosted the inaugural function on day 1, so that was fun. Never hosted a formal function like that before. Never wore a suit before either. 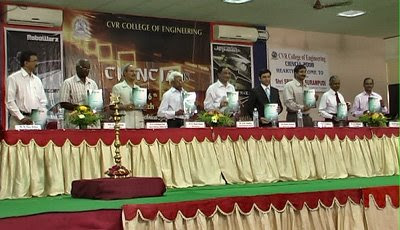 Coincidently, Karthik's big boss, Mr. Srikanth Surampudi (Head - HR for TCS Hyderabad) was the Guest of Honor for the function. Here's a small snippet of his talk (which was really good BTW) towards the end of the Inaugural function —