I had an online C Assessment Test at Wipro two days back, which went pretty well. There were 40 questions to be answered in one and a half hours. Most of the questions were the typical "What is the output of this program?" kinds that tests your understanding of the concepts and the quirks of the language, rather than your programming skills. So you probably wouldn't fare too well in the test if you thought the size of a structure containing two char members is 2 bytes or that int (*ptr)[3] was an array of integer pointers.

Anyway, with that test out of the way now, I will hopefully have a couple of weeks to myself until I officially start work.

Some days back I came up with this very crappy piece of art using Karthik's oil pastels. Now if I was as popular as Bob Dylan or Paul McCartney people would probably buy that for millions of dollars, but sadly I'm not.

I wanted to make something more presentable out of it, so I back-lit the drawing using two emergency lamps (to highlight the whites) and took photos of different sections of the drawing. 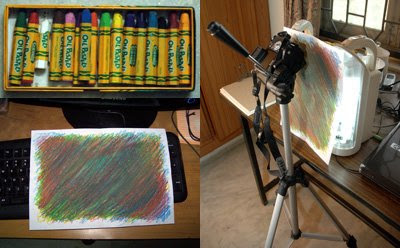 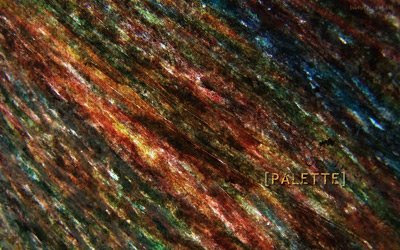 Speaking of oil pastels, you should check out Karthik's latest drawing of The Incredible Hulk. It's damn good! The movie was good too, far better than the other movies I've seen at the theaters recently — Speed Racer, Indiana Jones and the Kingdom of the Crystal Skull and The Happening.

In other news, I was trying to get my printer (it's a HP LaserJet 1020) to work on Fedora 8. Apart from installing foo2zjs, I had marked the HPLIP package for update, but for some reason Yum Extender marked all packages for which updates were available and began processing the queue. While the queue was being processed, a couple of packages caught my attention. Click the thumbnail on the left to see what I mean.

Amusing. I had no idea such packages existed.

Oh and by the way, this blog has now received over 30,000 unique visitors!

Now that the Wallpaper a Day feature has ended, all the sections of VarunAbhiram.com are up-to-date! Thanks all for the views and comments.

Since there will be few updates to the site from now on, I figured it's a good idea to add a panel showing the recent comments posted on the site — that way the site won't look totally dead; assuming of course, that people take the time to comment now and then.

I've also noticed on StatCounter that the Traditional Art section receives no views at all. Probably because it's the only section of the site that's not directly accessible from the main navigation panel. The drawings aren't great, but I'd like all sections of the site to have equal visibility. So in order to facilitate that, I plan to display the Traditional and Digital art together on the Artwork page, and add a filter to allow you to look at the sections individually. This will take some time to implement, as I'll have to avoid duplication of images that belong in both categories (the Charlize Theron and Tom Cruise images, for example). The RSS code and some of the other pages would also have to be appropriately modified. And hopefully I won't introduce any bugs in the process.

Anyway, while I ponder over what has to be done, have a look at this new wallpaper I made yesterday called "Corrosion" — 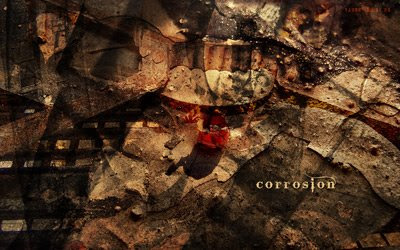