Few days ago, I made a couple of wallpapers out of images I rendered using Apophysis. The fractal flames it generates are usually pretty messy, and not of very high quality, so I had to do quite a bit of post processing in Photoshop and Paint Shop Pro to make them look good. Anyway, these are the two wallpapers I liked out of the bunch — 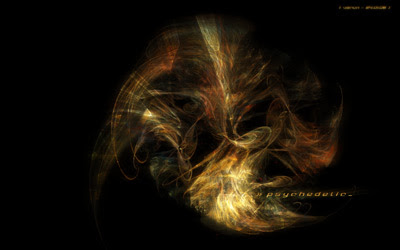 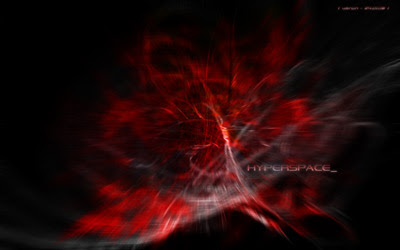 Oh, and Statcounter now shows that the number of unique visitors to this blog has crossed 20,000! And it was only in May last year that the counter crossed the 10,000 mark. Not bad, eh?
Posted by Unknown at 3:51 PM 13 comments:

Yes, I finally get around to doing another drawing! My last drawing, if you remember, was of Charlize Theron (from Æon Flux) way back in 2006.

It was really hard drawing after such a long time. I tried drawing this picture of Avril Lavigne first, but I just couldn't get her eyes right. All that eye shadow and under-eye detail combined with my rusty drawing skills made it impossible to draw. And when the eyes aren't drawn properly, the whole face looks weird. And that's exactly what happened.

Anyway, so after a lot of searching for easy images to draw, I ended up with this poster of Tom Cruise from Mission: Impossible 3. Wasn't as easy to draw as I thought it would be, but at least the end result bears some resemblance to the original. 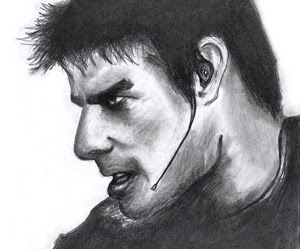 And I wasn't done with just the drawing. I decided to load it up in Paint Shop Pro and add some CG effects to it. Coincidently, I happened to stumble across this open source fractal flame editor called Apophysis, so I used that to render the blue smoke background. I then colorized the drawing to a grayish-brown and added the text and M:I 3 logo. This is the final result — 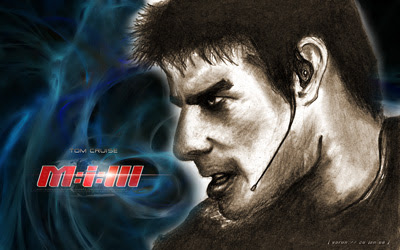 By the way, I now use a 19" Samsung 932NW monitor, so expect more widescreen images from now on. After all, what's the point of making these when I can't use them as wallpaper?
Posted by Unknown at 11:58 PM 10 comments:

Hey everyone, here's wishing you a very Happy New Year 2008! Have a great year ahead.