In all the three years I've been writing on this blog, I don't think there's ever been a post quite like this — dedicated entirely to the preparation of a chocolate cake. So why now all of a sudden you ask? Because I made one today!

Pardon me fellow chefs if this cake isn't as good looking as it's supposed to be, the only prior cooking experience I have is making scrambled eggs. Anyway it tastes real nice, and that's all I care about. With that said, let's get on with the cake-making. If you haven't made a cake before, read and learn.
The Preparation

I bought this box of "Pillsbury Rich Chocolate Cake Mix" from Food World the other day (life is simple when you don't have to worry about the ingredients that go into making a cake, let alone their proportions). And yes, you obviously need a baking pan. You could use a big rectangular one, but then you'd have to spend time cutting it up into pieces once it's done. The simpler option would be to use a cup cake pan like the one I used. That way you don't have to worry about people looking strangely at all those irregularly sized/shaped pieces.

Add 2 eggs, 1/4 cup refined oil and 3/4 cup water to the cake mix and stir the mixture till you get a smooth batter. The mixer helps in the "smooth" department.

And it's Bake Time!

Grease the pan with butter and pour the batter into it. Bake in an oven at 170 degrees for 25-30 minutes and you're done. It really is that simple! 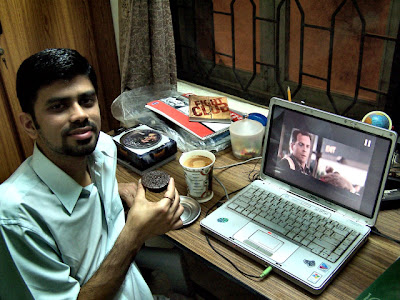 Like they say, "The proof of the pudding is in the eating". That's Karthik an hour ago with one of my cup cakes to go with that big mug of tea. Tea and chocolate cake is probably the weirdest combination ever, but who cares as long as he liked the cake! Oh and he's watching Die Hard in case you were wondering.

It's past 2am now (makes the latest XKCD so relavant), so Merry Christmas everyone and have a great day!
Posted by Unknown at 1:55 AM 15 comments:

"The Outer Darkness" wins a Cacoward!

December 10 was Doom's 14th Anniversary (coincidently, it was also the day Led Zeppelin performed their first full concert in decades!), and to mark this occasion, every year Doomworld.com comes out with the "Cacowards" — to recognise the best maps released that year and the people who made them.

I'm very happy to announce that this year, my level for The Ultimate Doom "The Outer Darkness" has been picked as one of the 10 Best Levels of 2007!! 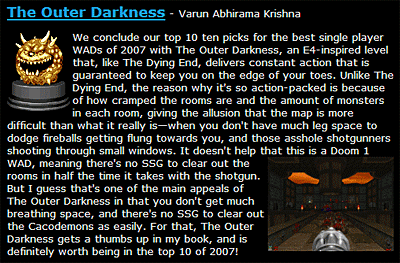 The relevant links are below —
Must thank Karthik for telling me about this, otherwise I wouldn't have even known! I don't frequent Doomworld like I used to, mostly because I hardly play Doom any more. Or any other game for that matter. And Karthik, thanks for that post on your site too. You mentioned it before I even got around to making a post here!
Posted by Unknown at 3:36 PM 11 comments:

The entire photography section is now up at VarunAbhiram.com! There are close to 50 photos in all over there now, the rest I thought weren't good enough to upload. If you think I missed out on some good ones, do let me know and I'll upload them. 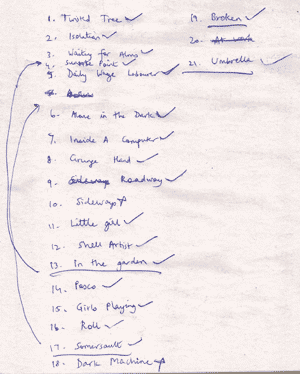 Next I'll be adding content to the Digital Art section. Lots of stuff to add there as well. How would you prefer the updates — batchwise or do I just add everything at once?
Posted by Unknown at 5:34 PM 2 comments:

Email ThisBlogThis!Share to TwitterShare to FacebookShare to Pinterest
Labels: photography

After Toby (Feed Me) and Karthik (Feed Me Too) added RSS feeds to their sites, it was only a matter of time till I added one to VarunAbhiram.com. Yesterday I was bored doing absolutely nothing all day, so I ended up adding it! Look for the little orange RSS icon in the navigation on the left. 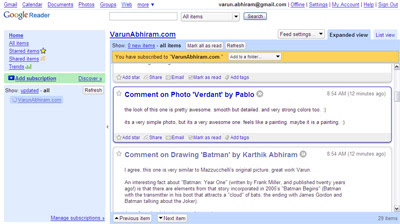 Karthik's post has a detailed write-up of what RSS is and how to go about adding a feed to your website, so I won't repeat all that here again. If you'd like to subscribe to the RSS feed at VarunAbhiram.com, or this blog for that matter, use an aggregator like Google Reader. All you need to do is to add your subscription (Eg: http://varunabhiram.com/rss is the subscription link for VarunAbhiram.com) there.

With this, I think I've added all the features I can think of to the site. Now all that remains is updating the content — that's one area I've been neglecting for a long time.
Posted by Unknown at 9:45 AM 2 comments:

Not one, not two, but three new wallpapers to make up for the lack of updates all this while. Hope you like them. I call this the Grunge series — 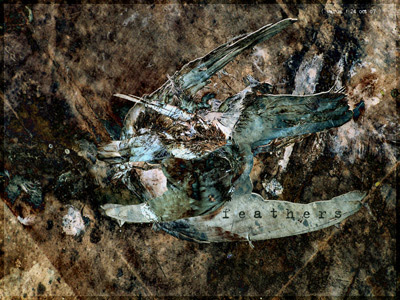 Made this around a month ago, but never got around to posting it because of continuous exams at college. This wallpaper is heavily inspired from the beautiful artwork in the Nine Inch Nails: The Downward Spiral 11-wallpaper pack. Blended together two shots I took of a dead bird, and then heavily edited it to bring out the colours and textures. Not exactly an ideal subject to make a wallpaper of I know, which is why I went in for a more abstract arrangement of images — easier on the eyes when you can't make out what is what. 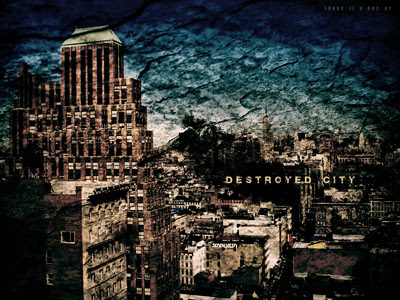 Ah this is my favourite of the lot. My dad had been to New York City a while ago, and I used one of the photos he took there as a base to make this. Why didn't I use an image of Hyderabad you ask? Well, the city is already damaged by developments, so much so that you can't make it look any more destroyed than it already is. This base image was just perfect for the wallpaper, and that's the sole reason I used it. I do NOT hate NYC or something in case you were wondering. Heck how can I hate the place when I've never even been there. 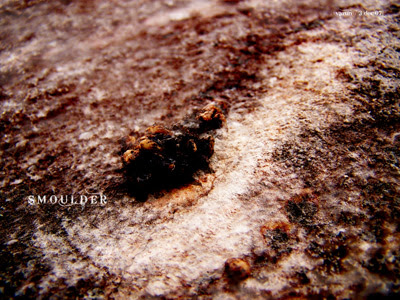 Made this one today morning. I know it looks like a single photo, but it's actually three different images superimposed on each other, each one with a different layer/blending style. I don't really know what that is, but I think it's either the seeds or the withered flower of a plant. I really like the perspective on this image. The curve from under the title is what adds interest to main subject I think. I set one of the layer modes to "Burn" which is what makes it look like it's smouldering. And I have no idea how the smoke showed up, there's nothing in the original! Oh well, it adds to the overall effect, so I'm not complaining.

I'd love to hear what you guys have to say about these wallpapers, so comment away!
Posted by Unknown at 12:59 AM 10 comments: