The Future Is Flux

Been ages since I did a drawing, so I wanted to do one. Took out the good 'ol exam pad (I use that to keep the paper on - habit I caught from Karthik) and the pencils, decided to draw something out of Æon Flux since I had that on my desktop. 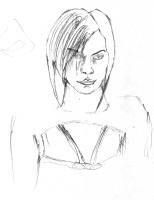 I first tried drawing this pic, but I couldn't draw it at all! I'm used to drawing comic stuff where there are sharp cuts and definite outlines for everything - the nose, mouth etc., so was tough drawing a person where all the facial features are defined only by shading. As you can see, it was way too crappy for me to continue working on it. Charlize wouldn't be too happy if she saw it either.


So I chose this pic instead - much simpler. Also closer to the comic style I'm comfortable with. As you can see, this was coming along nicely...

I finished this on 20th morning at 1am (thanks to the people who kept me company on messenger while I was drawing). 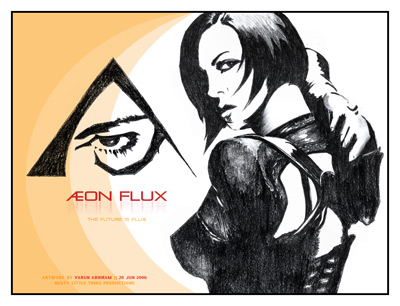 I drew the logo and Charlize on two different papers. I scanned both, resized them to the size I wanted and pasted them on that background I made. Was supposed to draw the text also, but I was too lazy so I just typed it in some font. I think the end result is pretty cool. Comments welcome.
Posted by Unknown at 9:24 PM 17 comments:

Yours truly has won this week's photo contest at Bytephoto. Very few people voted this week, so not sure what to think. I guess I should start posting my photos elsewhere also, just to see how well they do there.

Oh and it wasn't a close competition as I expected.
Posted by Unknown at 8:46 PM 5 comments:

The Birthday
Secunderabad is 200 years old! Nice to see the city lit up again - last time I saw so many lights all over the place was during Diwali. If only I wasn't so busy with some work at college (you'd think I'd be free from college-related work during holidays) I would have attended a lot of the events and taken lots of photos. In fact, there was a pretty impressive lineup of events - you can see the entire schedule on the Official Hyderabad website. Unfortunately I'm free now, but all the celebrations ended yesterday.

Surprisingly, I couldn't find any photos of the celebrations. Only found this one page, but all it has are images of scary dancers.

The Protest
I attended the Anti-Reservation Protest on June 4 at Indira Park - first protest I was ever part of. The turnout was much lesser than expected and nothing sensational happened, so obviously the media disappeared after a few minutes. Sad that Hyderabadies are so lazy to voice their opinion. Sitting at home cribbing won't solve anything you know. Not that the protest solved anything, it can't because the issue is incredibly complicated. But one thing is for sure - reservation for the Other Backward Castes (OBCs) in the premier government educational institutions like the IITs, IIMs and other institutions of higher learning is not the solution.

To me, a solution can be formulated only once the government reforms itself and India's corrupt caste-based village structure is done away with. When (and if) that'll ever happen? Nobody knows. Especially since our ministers are a bunch of clueless people. Speaking about clueless people, if you missed the interview with Arjun Singh (Minister for Human Resource Development) on CNN-IBN, read it here.

The Rest
Watched Æon Flux (7/10) - Charlize Theron looks gorgeous, loved the set design. Also watched Inside Man (8/10) - a little slow moving for my taste, expected a better ending. Was pleasantly surprised to hear the Chaiyya Chaiyya song from Dil Se playing during the opening credits of the movie!

Can't wait to watch Ghoom on MTV this Saturday. It's a 45 minute spoof of the movie Dhoom, produced under the banner of MTV Fully Faltoo Films. It ought to be fun!

New photo over at my gallery. My 'Waiting for Alms' shot made it to the weekly photo contest finals. Lots of great shots this week, so it should be a close competition.
Posted by Unknown at 11:58 PM 3 comments: